A few months ago, I took a 3-hour international desserts baking class through the Milwaukee Public Schools Recreation program. My classmates and I received recipes for ten desserts, we were broken up into groups of two and each group made two of the desserts during the class.

There is one recipe in particular that I enjoyed immensely, banoffee pie. It is a British banana, toffee (Dulce de Leche) and whipped cream dessert. I have made this delightfully wonderful pie for Thanksgiving and Christmas festivities. And for this dessert you don’t even need to turn on your oven! Oven space saver during the holiday season.

I have made a few tweaks to the recipe I received in class, using double the amount of bananas, half the toffee (Dulce de Leche) and cinnamon graham crackers instead of honey for the crust. Below I have included the original recipe with my tweaks in parenthesis.

This could be beautifully displayed if you use a tart pan with a removable bottom, so that after it is made it could be removed from the pan and set onto your favorite cake stand.

Hopefully you enjoy this pie as much as my friends, family and I do!

Follow me to receive notification of more delicious recipes! 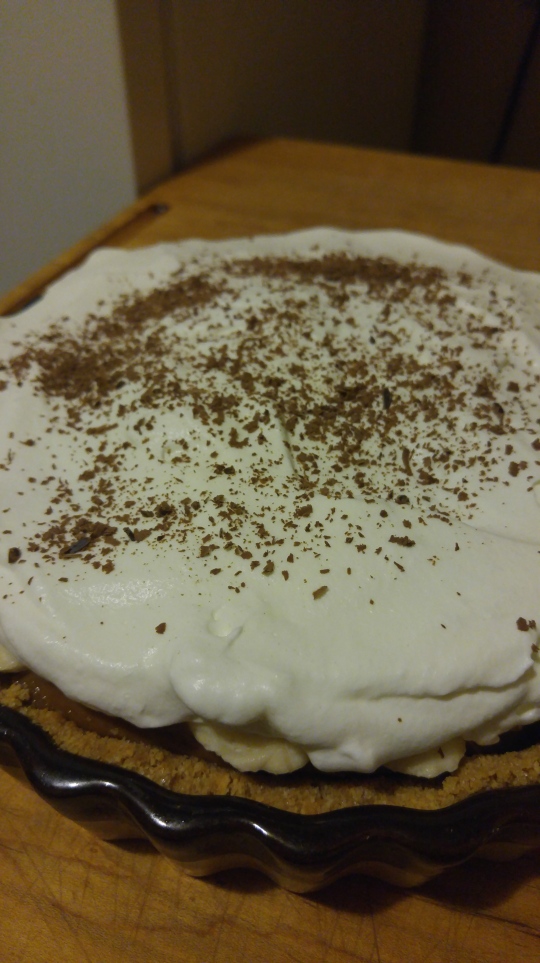 Chill a medium bowl in the freezer. This will help make the whipped cream quicker.

After the crust has chilled for 30 minutes, spread the Dulce de Leche over the crust and refrigerate until ready to serve.

When ready to serve, slice your bananas and toss with lemon juice to prevent browning. Arrange the slices of banana over the Dulce de Leche.

Remove the bowl from the freezer, pour in the heavy whipping cream. Beat the cream using a hand mixer or whisk until soft peaks form. Add the confectioners’ sugar and beat until stiff peaks form.

Top the bananas with the whipped cream. Shave or grate the chocolate over the whipped cream if desired. If using a tart pan with a removable bottom, go ahead and remove from the pan and place on your favorite cake stand or serving platter. Serve and enjoy!